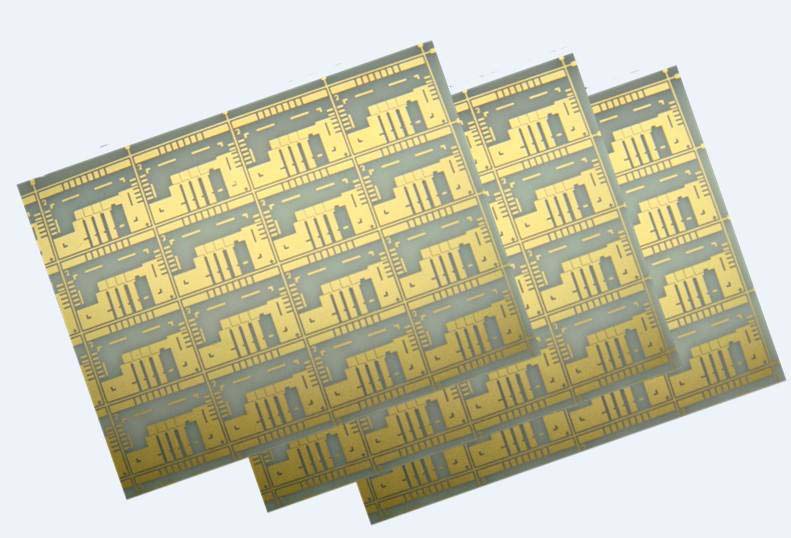 With the widespread use of Ceramic PCB, which has thick film ceramic PCB and thin film ceramic PCB. We know that the SMT is essential for the application of electronics technology. SMT not only plays a role in protecting the chip and enhancing the thermal conductivity. but also the internal world of the chip and the external circuit bridge. as well as the integration of common functions through a reasonable structural design. Among the many SMT methods. ceramic circuit boards have gradually developed into a new generation of integrated circuits. and power electronic modules ideal SMT substrates. in which the ceramic substrate metallization process is a very important part of the ceramic PCB production. We often hear the terms “thick film circuit ceramic PCB” and “thin film circuit ceramic PCB”. “Ceramic substrate” is the use of two processes after the metalization of ceramic circuit board products.

First of all, their role is to produce integrated circuits. Integrated circuits are a specific process on top of a separate substrate to form a passive network . and interconnect active devices, thus forming a miniature electronic circuit. so that electronic devices can function effectively.

The integrated circuit process involves fabricating the transistors, diodes, resistors. and capacitors required for the circuit in a certain process on a small semiconductor wafer. glass, or ceramic substrate, interconnecting them with an appropriate process. and then encapsulating them in a tube housing so that the size of the entire circuit. That is greatly reduced and the number of lead wires and solder points . The difference between thick film and thin film circuits means completed with integrated circuits on ceramic substrates in thick film and thin film technologies, respectively.

Compared to three-dimensional bulk materials, so-called films. because of relatively small thickness and size. they can generally as two-dimensional forms of matter.

According functions divided into three kinds:

Thick film technology is a method of depositing a paste directly on the substrate through micro-flow. direct writing technology such as screen printing. micro-pen direct writing technology, and ink jet printing technology. and forming conductive lines and electrodes by high temperature firing. which is applicable to most ceramic substrates. After the material heated at high temperature. it forms a film that adheres firmly to the ceramic circuit board. and after repeating the process several times. a circuit containing resistance or capacitance with a multilayer interconnect structure.

Its paste is mainly composed of three parts: the functional phase, the bonding phase, and the carrier.

The bonding phase is mostly glass, metal oxide, and composites of glass and metal oxide. and as the name implies, the role of the bonding phase is to bond the sintered film to the substrate. Unlike the powder state of the functional and bonding phases. the carrier is a solution of polymer in an organic solvent. which affects the process characteristics of the thick film . and is often used as a temporary binder for printed and dried films.

With the development of miniaturization in the electrical and electronics industries. the density of thick film circuit assembly and the density of wiring is constantly increasing. which requires finer conductor lines and narrower line spacing. Thick film technology for screen printing is the most widely used. The advantages of the technology are simple. but there are also obvious disadvantages: The preparation of the minimum line width of the conductor is difficult to lower than 60μm. and can not produce three-dimensional graphics. so it is not suitable for small quantities, fine circuit board production. Although the micro-pen direct writing technology . and inkjet printing technology can deposit high-precision conductive graphics. the paste viscosity requirements are high, prone to channel blockage. Moreover, the electrical properties of conductive lines formed by thick film technology . It can only used in electronic devices with low power and size requirements.

Thin-film technology is a wafer-level manufacturing technology. and is the main method for depositing thin metal films in microelectronics manufacturing. To prepare ceramic circuit boards using thin film technology. a 200-500 nm Cu layer is first deposited on the ceramic surface as a seed layer by evaporation. magnetron sputtering, and other surface deposition processes for subsequent plating processes to be carried out. Then, through the process of lamination, exposure, development. and other processes to complete the transfer of graphics. and then plating so that the Cu layer grows to the required thickness. and finally, through the process of de-filming. etching to complete the production of conductive lines.

In recent years, the ceramic PCB prepared by the thin-film process has shown great competitiveness. Espically in power type LED SMT . because it can better meet the requirements of high precision. even under the continuous shrinking of line size. thin film circuit lines. minimum line width of 2um. high precision (line width error of 2um). but also because the “thin line” can not undulate. thin film circuit surface quality requirements of the substrate commonly 99.6% purity of alumina. the substrate used for thin film circuit purity requirements commonly 99.6% purity of alumina. represents the processing difficulty and cost escalation.

In addition, thin-film circuits can also be easily used to manufacture multilayer circuits. Due to thin-film multilayer circuits with high interconnection density. high integration, the ability to manufacture high-power circuits. the entire SMT structure with system-level functionality and other outstanding features. the application in the microwave field is very competitive. especially in the airborne, starboard, or aerospace fields. Its small size, light weight, and high reliability features are very prominent. There is potential for microwave circuit modules (low-noise amplifiers, filters, phase shifters, etc.). and even increasing demand for T/R component substrate manufacturing technology.

Compared to other types of substrates, there are still problems with the process using a string-shaped approach. relatively low yield, high manufacturing costs. and the number of manufacturing layers is limited, equipment and process conditions.

Let Talk About Your Project Now！